Camino de Santiago. Route and History.The beginning of the Central Portuguese Route in the south of Portugal is linked to the structuring presence of the Order of Santiago, protagonist of the conquest of Alentejo and Algarve since the century. XII, and later manager of most of these territories, leaving in them the mark of the cult of Santiago Apóstolo.

The start of the route in Faro gives the Central Portuguese Route a national dimension and is justified in the connection between the capital of the Algarve and Lisbon, covering the territories of the old Order of Santiago, in particular, Castro Verde, Santiago do Cacém, Alcácer do Sal and Palmela.

Phases of the Southern Route of the Camino de Santiago

10 Reasons to take the route to Santiago de Compostela

How to get Compostela (Document certifying the pilgrimage)? 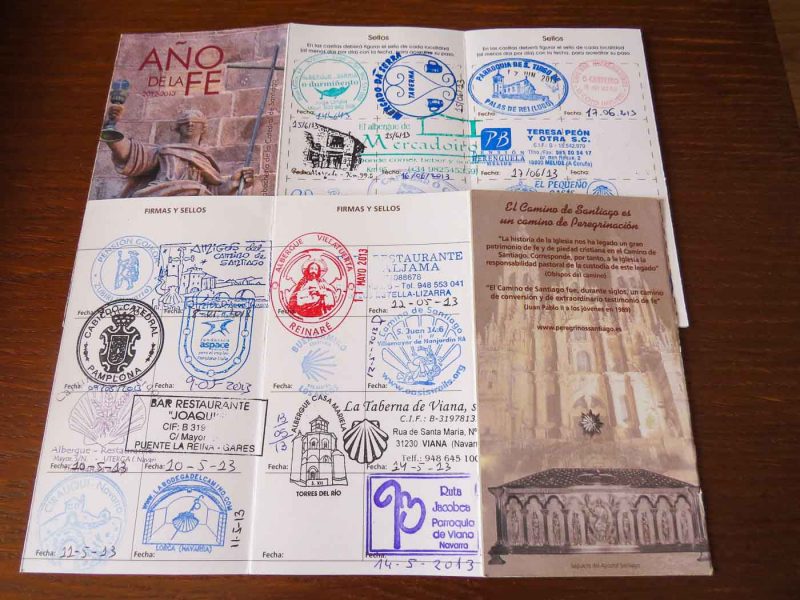 To prove that the distance was effectively covered, the Santiago Pilgrim's Workshop requires that the Pilgrim's Credential be stamped at least twice a day. You can stamp it in many places along the way, such as pilgrim hostels, hostels, hotels, churches, ayuntamentos (town halls), Guardia Civil posts (police) and cafes and restaurants. Do not worry that there are many stamps / seals.

Once you have arrived in Santiago, just go to the Oficina do Peregrino and present your stamped credential. The pilgrim's credential will bear his last stamp, certifying the date of arrival in Santiago, and immediately on the day he will be given to Compostela and the distance traveled certificate (the latter is optional and costs 3 €).

Where to get Compostela Credential Document?

In Portugal the Pilgrim's Credential can be obtained from the following places:

The origin and history of the Camino de Santiago de Compostela

Tiago ("the old man") was one of Jesus' twelve apostles. It was he who, after Christ's death, continued his apostolic work in Jerusalem. Later he embarked for Andalusia (southern Spain), a place belonging to the Roman Empire, where there was trade with Palestine, and where he continued his evangelizing mission to the North of Spain, passing through the Portuguese Lands, arriving at Iria Flavia, Galicia (autonomous community in northwestern Spain).

Frustrated to see that his objective was not accomplished, he decided to return to Jerusalem.

Upon arriving in Palestine and after disobeying the Roman prohibition on preaching Christianity in the region, he was beheaded at the behest of Herod Agrippa, king of Judea from 41 to 44 A.D.

The disciples of James, Athanasius and Theodore, collected the body of the apostle and took it secretly on a boat to the places of his preaching in northern Spain.

The two disembarked in Ría de Arousa, Galicia, at the port of Iria Flavia, and placed the boat on a rock (which originated Villa de Padrón, which today belongs to the Portuguese Way) and went to ask for permission to bury the body of the apostle James. The area where they landed was under the control of the Pagan Kingdom of Queen Lupa, who lived in the village of Lupariou, very close to what we now know as Santiago de Compostela. At first resistant, a wave of miracles attributed to Tiago ended up convincing Queen Lupa to bury him in the region.

In the following centuries, the grave trail was forgotten. In the year 813 A.D., legend has it that "Santiago" appeared to the hermit Pelayo during a "rain of shooting stars" on the hill where he was buried. After communicating his meeting with Bishop Teodomiro de Iria Flavia, he called on King Alfonso II of Asturias, to go there to check the veracity of the story, thus becoming the first pilgrim from Oviedo to Santiago stepping on what is now known as Primitive Path.

Around AD 847, the construction of a small church was ordered on the site where the tomb was found and centuries later it gave way to the Cathedral, where pilgrims worshiped the apostle. The village became the city that bears the name of Santiago de Compostela, a word from the Latin Campus Stellae (field of stars).

In the middle of A.D. 910, Duke William I promoted pilgrimages to Santiago to combat the materialism to which the Catholic Church was committed at the time.

Since the discovery of the supposed tomb of Jesus' apostle in Galicia, each traveler has been able to make his own way. It is often said that the true Camino de Santiago is from the door of your home to Santiago de Compostela. The pilgrimage was generally a free and personal decision to ask for some divine grace, to make some personal choice or even an intimate and religious search. In many cases, the Camino de Santiago was also used as a punishment imposed by a judge or as a penance for some confessor for “particularly serious” sins. The rich could send a person to make the pilgrimage on their own.

The Camino de Santiago, was included in the Unesco world heritage list in 1993 and is one of the best known pilgrimage routes that mix trekking, religion, mysticism, psychological treatment and tourism.